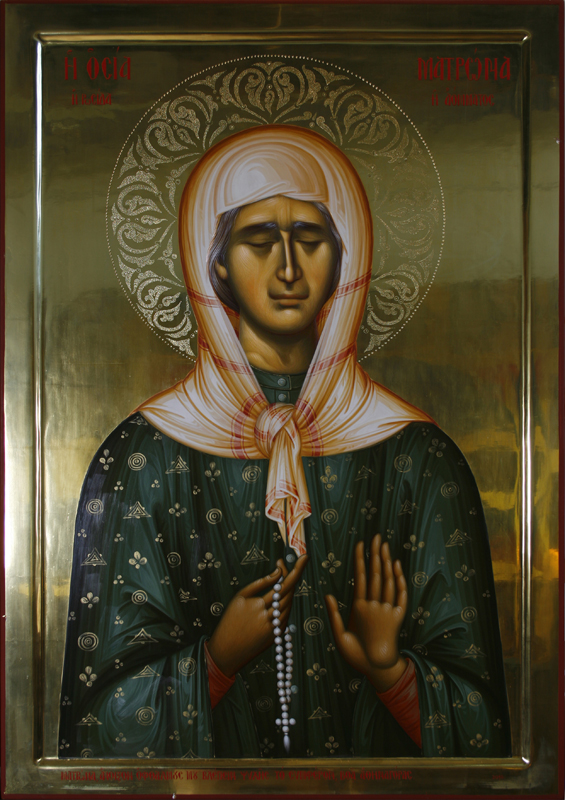 Blessed Matrona was born in 1881 AD in the village of Sebino, Epiphansky of the Tula Province, now called Komiyski, by pious and virtuous parents, Dimitry and Natalia. The Blessed had three brothers, Ivan, Michael and Mary. Her parents were poor so they thought of giving the child they were expecting at the Golitsin Orphanage. But Matrona's mother saw in a dream, before her birth, that a bird in human form, but no eyes came and sat on her right hand. She took her dream as a sign from God, that the child they would bring to the world would be a vessel of happiness and thus, decided not to hand her to the orphanage.

She was born blind. At her baptism, performed by pious and proactive Father Vasilios, a sweet-scented cloud of light was formed above the font. Another sign that revealed the spiritual progress the Saint would have. She only went to church. When her mother could not find her at home, she knew that Matrona was at church. From a very young age, she was given the gift of foresight and insight. She knew people's illnesses, their problems, their failures, and so she warned and advised them. She visited many pilgrimages of Russia. During one of her visits, she me Saint John of Kronstadt, who was still alive at the time. Before he even saw her, he asked everyone to make room and shouted: "Matrona, come here" without knowing her. And Saint John continued: "This girl will be my successor. She is the eighth pillar of Russia." Matrona was only fourteen years old at the time. At age seventeen, not only Matrona did not see, but she could not walk either. She lived like this for fifty years. Nevertheless, she never complained and the reason for everything that was happening to her was spiritual and that only God knows why. He said to those who visited her: "The time will come when they put the cross and the bread in front of you and ask you to make your choice. We will go through hard times and we, Christians have to choose the cross."

She blessed the people who visited her by putting her hands on their heads and reading prayers to them. On her forehead, a small depression was formed by the countless signs of the cross she made. God also blessed her with the gift of miracles, and so she healed and spiritually helped many people. His Holiness revealed to her that the day she would exit this vain world was approaching. Three days before her death, she gave the instructions for her funeral service and burial. The Blessed Saint Matrona rested in peace in 1952 AD and was buried in the cemetery of the monastery of Danilov.